#Bring Back Our Girls

In support of #BringBackOurGirls – the movement to find and bring home the over 200 girls and young women kidnapped in Nigeria one month ago – Girls Can Do is extremely proud to announce Rani Hong, human trafficking survivor and now UN Special Advisor and President of the Tronie Foundation, will be speaking on Saturday at Benaroya Hall. 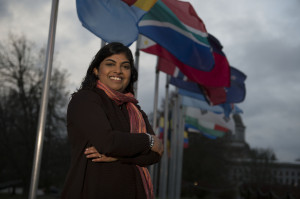 Last year, Rani Hong addressed the General Assembly of the United Nations gathered in New York City.  Her goal was to give voice to the continued plight of millions of enslaved people throughout the world, in part through the designation of a day being formally set aside in which the world recognizes these issues, and reminds the world of the need to protect the rights of victims of human trafficking.

A resolution developed by Azerbaijan, Armenia, Belarus, Russia, the United States, Tajikistan, Turkmenistan and Uzbekistan was approved by the General Assembly, without a vote, to designate July 30 as the World Day Against Trafficking in Persons, to be observed every year starting in 2014.

Today, May 14, 2014,  Rani and The Tronie Foundation announced the start of their new campaign to raise awareness of human slavery in the weeks leading up to the first World Day Against Trafficking in Persons.

Rani’s speech at the Girls Can Do event, May 17, will help elevate the need for educating girls and women worldwide so they can find their own voices and create a world that is equal, just and fair.

Rani has been awarded United Nations Human Rights Award and as well as the City of Seattle’s “Distinguished Citizen Award for Human Rights” award. You can read more about Rani at her website, The Tronie Foundation and also read her recent article in the Huffington Post called One Month of Waiting in Nigeria.